I’ve always been fascinated by Sega’s video game consoles. Only a few of them succeeded, and among them there are just as many failures as successes. So many of them were either horribly designed, poorly launched or woefully supported that it’s almost impossible not to wonder how such a big corporation–one time industry leaders–managed to make such eccentric decisions. My first instinct was to conclude that the choices Sega made as a corporation bore the mark of a considerable amount of creative freedom: perhaps there was, structurally, within the company, more room to move in terms of experimenting with ideas. After looking closer at what happened in the video game industry between the years 1989 and 2001, I was surprised to find that I was absolutely wrong. In that decade-odd period of time, the home console ‘region’ of the video game industry was a veritable hurricane of corporate politics: inter- and intra-organisational factional warfare. The entire industry was up in arms in a struggle for prestige and financial supremacy, and Sega was caught up in it. One such example of the tumult video game companies went through during this period is the Sega Saturn. The politics involved in the jump to 3D graphics in video games was difficult for everyone involved, none more so than Sega, and in what follows, the reader will find the definitive explanation for the reason why Sega released such an incredible (although not totally unsuccessful) mess as the Saturn.

The Saturn is a perfect example of a complete mess. Sega did nothing to foster goodwill for the platform by launching it four months earlier in the US than originally scheduled, at their 1995 E3 keynote, in an abortive attempt to one-up Sony, alienating developers and retailers alike. If industry groups weren’t turned away, they were forced to incur great costs to secure their cooperation with the company. Gamers were presented with a very small number of launch titles (and a lengthy wait for any more), and would be set back $500 to purchase a console, which, adjusted only for inflation, equals almost exactly 800 Australian dollars in today’s terms. Add to this the previous debacles associated with the Sega CD and 32X, and you have, at the consumer end, a critical and financial nightmare.

How did it come to this? Rewind to late 80s-early 90s where you have Nintendo and Sony collaborating on the SNES PlayStation–an optical storage medium for Nintendo’s famous soon-to-be-released 16-bit console. Here is a match made in heaven. Nintendo, true to form, desires to control every facet of the proto-CD-ROM medium’s distribution by encasing everything in a proprietary plastic caddy (echoes of the 64DD here). Sony wants the absolute opposite: licensing for the technology for anyone would pay. Sony gets up at the Consumer Electronics Show in 1991 and publicly announces this without prior notice to Nintendo. Infuriated, Nintendo cuts the (as it were) R&D umbilical cord and announces that it has instead signed on with Philips, the creator of the CD-ROM, for the development of an optical medium. The outcome of this was two-fold: Nintendo’s efforts with Philips were disastrous (NB. the ‘full-motion video’ Zelda game for the CDi, in all its hilarity), and the resulting legal quagmire to which Nintendo was subjected ensured that it would be forced to totally rebuild its next console, and base it on the age-old cartridge medium — not in-itself a bad outcome, in my opinion — and, secondly, to the horror of the then mainstays of the video game industry, Sony would be prompted to enter the video game console market.

It’s important to recount the entry of Sony into production of video game consoles because the Sega Saturn was, in effect, a reaction to the Sony PlayStation. Sony had connections in the third-party industry, and they exploited them. The PlayStation was built around an improved version of a processor that Sony had been manufacturing for Silicon Graphics (SGI) workstations for years. The specific details of the CPU are irrelevant; the important thing to take away from the PlayStation‘s architecture is that it was cheap to manufacture, simple to understand (therefore easy to program–and, prospectively, would be well supported in terms of programming libraries), and, for its time, very powerful.

Sega’s upper echelons were rocked, upon learning of this information, when leaked. Sega had, for decades now, been an organisation heavily rooted in arcade gaming, and the Saturn was, like the Mega Drive before it, to be based on the architecture of an arcade board (in fact it’s worth mentioning that the reader might find the ease with which Sega shoe-horned the Mega Drive into its case very interesting). The Saturn was originally based on a single-processor design, like the PlayStation, and was originally intended to be proffered up as the ultimate 2D console, but, in its original iteration, was easily eclipsed by Sony’s offering in raw 3D processing power.

Sega’s President, Hayao Nakayama, ordered that the Saturn‘s original hardware design be completely scrapped, and rebuilt from scratch. The person responsible for virtually all of the design of Sega’s hardware, Hideki Sato, was sent back to the drawing board. He came back with the parallel-processor based platform that the Saturn eventually became. The concept behind this architecture was fairly radical, and, given that Sato and his team of engineers (the ‘Away Team’) had virtually no time, it was all assembled out of off-the-shelf components.

All of this was occurring at the same time as a bitter struggle between Sega’s main office and Japanese division, and the company’s North American division. Sega of America was then headed up by Tom Kalinske, who had previously lead the toy company Mattel. When he was parachuted into his position in Sega by Nakayama in 1990, he knew nothing about video games, but he was a marketing professional: he instituted aggressive advertising (Sega Does What Nintendon’t) and business methods (‘spend into a profit’) that were employed in both Europe and the USA that well and truly rustled the jimmies of his Japanese counterparts. Kalinske’s decisions were, for a time, insanely successful, winning Sega an enormous chunk of the Western video game market, but it rewarded the company with mountains of debt, a sour taste for Japanese business ethics. When Kalinske and his council of elders found themselves thoroughly unimpressed with a demonstration of Hideki’s team’s efforts, instead suggesting to Nakayama that Sega instead construct a console with a unified processing structure based on another chip from Silicon Graphics, they were silenced. Against Kalinske’s protestations, also, Nakayama discontinued Sega’s support for the Mega Drive in 1996, when the platform was still performing very well (compare with the Apple II). Sega of America was forced into launching whatever Sega of Japan wanted, whenever it wanted. 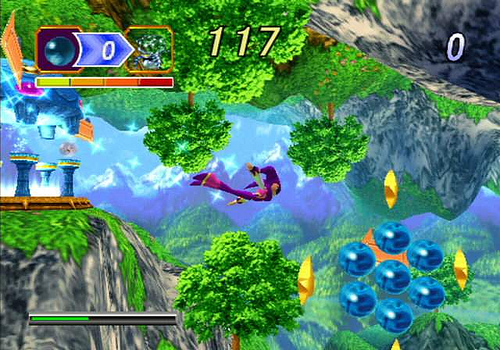 _Nights Into Dreams_ proves that it was the difficulties with the _Saturn_‘s architecture, and not its ‘overall power’ that determined its graphical prowess.

The result of the Saturn‘s parallel-processing architecture, on the other hand, was (justly or unjustly) a nightmare for game development. The hardware assembled by the Away Team would have easily outclassed the PlayStation if utilised correctly (and did, in quite a few instances), but it was based on the idea of parallel processing, something which was not (and still isn’t) very commonly understood or employed in video games. By comparison, Sony’s console was based on a unified architecture, and, critically, the SDK released for Sony’s _PlayStation _provided for development in C, higher level of programming than what had been the traditional language of game development, assembly language. This coincided with a broad generational shift in the industry to higher-level programming, which made the skills of programmers from a great many other disciplines suitable for game development. Old hands might have looked on in derision at this virtual army of less experienced programmers gravitating to the PlayStation, but the unified architecture and readily-understood SDK of the PlayStation made third-party development insanely easy. The Saturn, by contrast, by and large required low-level assembly language to access its potential; real programming genius. There was indeed genius expended in a fair number of Saturn titles, but, when it came to finance, it was too little too late.

The Saturn was discontinued only three years after its US release, hot on the heels of the Sega Dreamcast. By that time, Sega had suffered crippling losses, sacked almost a third of its global staff, and Hayao Nakayama — among other company leaders — had tendered his resignation. Sega’s corporate structure was almost entirely flushed out and replaced with new faces. However, like its predecessor, the Dreamcast would also fail to turn Sega some success. Ignoring the significance that the lack of a DVD drive would have made with respect to the Dreamcast,_ _the enormous amount of consumer goodwill that Sony had built with the original _PlayStation_, and the equally horrifying amount that Sega had squandered with the _Saturn_ (let alone with the _Sega/Mega CD_ and _32X_) guaranteed that the launch of the _PlayStation 2_ would blow the _Dreamcast_ out of the water. Sega was more or less finished in the home console business.

The fantastic thing about this whole story is that console that Sega finally produced was not based on any rational or scientific reflection: it was based on political machinations. Many have labelled the decisions of Sega of Japan to force their American counterparts to pull rank ‘corporate arrogance’, and I think I agree with that assessment. Despite that, though, the Saturn is such an interesting piece of hardware. Furthermore, there are a plethora of platform-exclusive games that are both innovative in concepts and in programming. Take, for example, the game Powerslave/Exhumed, a first-person shooter (something of a Doom clone) that featured spectacular graphics for its time because its programmer, Ezra Dreisbach, decided to take the time to get to know the console’s architecture. Read all about it here. To become better acquainted with some of the games that defined the popular life of the Saturn, see Racketboy’s article here.

The Saturn is worth your time because it failed. Not because it provided Sega and onlookers with a lesson, but because it avoided the inauthenticity that so frequently accompanies success. And I think that that might go  the same for anything that fails.

I have the write-up on Eidolon’s Inn to thank for this post. As you’ll no doubt discover if you read both this article and the six-page one at Eidolon’s, much of this article is simplify paraphrased and/or retold. I make no claim that any part of this post that resembles _Eidolon’s _is original work. If you have some time, take a look around. The frankness with which the multiple authors describe their projects and musings (a 4-bit handheld console called the Jaguar, complete with its CPU’s instruction set) is pretty cool.