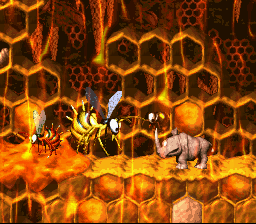 I said I’d review Double Dragon II first, but, seeing as I’ve just come into possession of DKC 2, I gave that a spin and I was pretty much blown away.

You can find all this information elsewhere (as it’s pretty much not in dispute), but, just in case you’re wondering, DKC 2 was published one year after the first DKC, in 1995. It was, again, like the first, developed by Rare to be published by Nintendo, using pre-rendered ‘three-dimensional’ sprites that were compressed to be later accessed by the Super Nintendo.

The three Donkey Kong Country games were pretty much pumped out every year since 1994, much to the chagrin of Shigeru Miyamoto, who despised/lamented the fact that one of the sole reasons DKC ended up becoming the best-selling game for the Super Nintendo (selling around 8 million carts, I think – you can call me out on that)  was because it had pretty spectacular graphics. The effect that this game had on the people’s preference of video-game purchase had Miyamoto roped in to redesigning Yoshi’s Island (another really good game) to make it more similar – Miyamoto’s compromise was to make YI’s appear as if it was crayon-drawn.

The first DKC shares roughly the same level of visual sophistication with the second and third, but, in all respects, the second is a huge improvement on the first in terms of game-play. The game is perfectly paced, introducing you to new content at just the right speed as you progress, suggesting certain courses of action that builds up to steadily more complex and satisfying game-play. If/when you fail a manoeuvre, you’re more than likely to be introduced to hidden level content, and this really broadens and deepens the value of this game’s design – your mind will literally be exploding from the sheer amount of secret stuff that’s stashed away in every level, the real satisfaction comes from working out how to get it.

The level maps are littered with mini-games and bonus rounds, most of which require you to spend tokens that you collect in levels, which is a really good way to stagger game-play and keep one from splurging on all of the game content. The mini-games break up the game, give you a chance to chill out – Rare seriously nailed it, much like they continued to do so in GoldenEye 007 and Conker’s Bad Fur Day on the N64, but more of that later.

The game’s sound is a top demonstration of the SNES’s hardware advantages over it’s competitors of the 16-bit era. It’s a damn good thing that Nintendo waited to release the SNES, because they got lucky by being able to muscle their way through the end of that generation of console gaming with good sound and visuals. This could put one to thinking, though: both Sega’s Saturn and Dreamcast were released early, and met fairly dismal fates; could Nintendo’s Wii U suffer the same end? That said, the Saturn is said to have failed because of it’s haphazard hardware design, the Sega Dreamcast due to the incredible product good-will of the Playstation 2, both of these facts mitigate an assessment of a ‘release early, meet failure’ test. To return to the game’s sound, one should pay good attention to its astutely-chosen MIDI sound-set, almost fooling one at times that they’re listening to recorded music. The landscape that the game’s music straddles is huge for the technical limitations with which Rare had to deal: from rap music to the subtleties of whispering wind.

Dixie and Diddy Kong’s level-finishing moves are the icing on the cake – you should go out and get this game at all costs.

DKC, DKC 2 and 3 are all available on the SNES, GBA and on the Wii Shop Channel for 800 Wii Points. You could, alternatively, you know, acquire it through other means – but, perhaps unlike other games, you might run into suitable gamepad input methods; you need a proper controller.